Loading...
Track Your Order
Help About Us Login / Register
x

Orchids are the largest flower family in the world, including more than 30,000 different species and more than 200,000 hybrids. This wide variety of orchid plants makes them a favorite decorative element for any home, building, or yard. Because their original habitat is the tropics, they thrive in an environment with plenty of air circulation and light.

How difficult is it to grow orchids in temperate climates? Most orchid varieties do not grow well indoors, but some varieties and hybrids are created to thrive in colder climates. Initially, it is best to purchase an already mature plant that requires less maintenance than young plants. 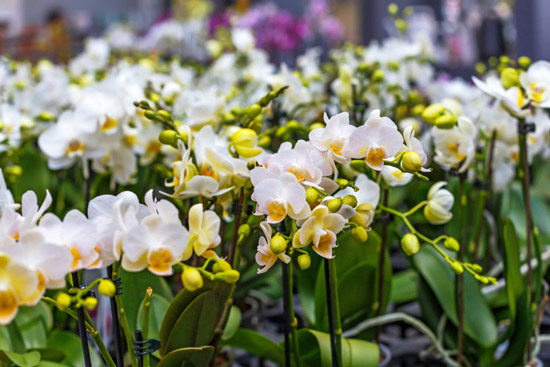 How Do Orchids Grow?

Depending on their growth habits, there are two main varieties of orchid plants. The first ones are monopodial orchids that have a single stem growing upright and leaves growing opposite each other along the length of the stem. The stem that holds the flower emerges from the base of the highest leaves. Phalaenopsis and vandas are two types of orchids that grow in this fashion.

The more common growth habit is the sympodial one. The orchids that exhibit it grow horizontally and develop fresh shoots from the old rhizome. These shoots then become the base of the new stems and flowers. Cymbidium, cattleya, dendrobium, and oncidium grow in a sympodial way.

How to Care for Orchids

There isn't one rule for how to raise all 30,000 species of orchids. However, general tips on a flower's preferences can be given based on the way that the plant looks. If the orchid has few leaves and their texture resembles leather, then this is a flower that needs generous amounts of light. If the leaves are soft and fine, then the plant is light-sensitive and prefers a spot with less sunlight.

If the plant has pseudobulbs that are large, then it should be watered once in a while and be planted in a coarse soil that does not hold moisture. If the orchid is without pseudobulbs, it will need more watering and soil that retains more moisture. 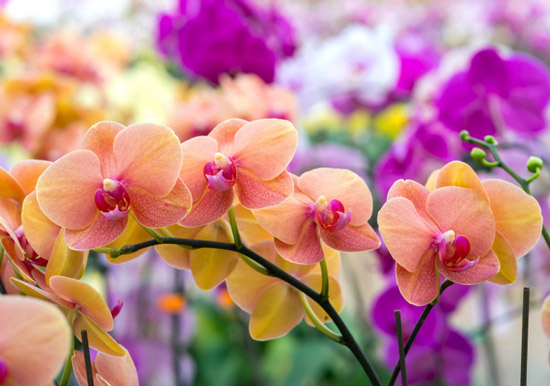 Orchids as a whole are very fond of light. To grow well, orchid plants need 12 to 14 hours of light each day throughout the year. To achieve this, the plants should be placed under artificial lights when the sun goes down so they get their day's worth of light. To give them the most sunlight possible throughout the day, the plants should be placed in south or east-facing windows. If there are no windows facing toward the east or south, they will do much better under artificial light. They should be placed 6 to 8 inches from a couple of 4-foot fluorescent bulbs. Since some species of orchids require a wide spectrum of light, the best choice for artificial light is a full-spectrum bulb.

Some orchids can be terrestrial, such as the paphiopedilums and cymbidiums. They grow in a standard soil environment. However, more orchids are epiphytes that grow in the air. The roots of these orchids are covered with a fine layer of cells called velamen. These cells absorb moisture and water from the air. Thus, the perfect medium for most orchids is one that has good air circulation and does not hold too much water. Depending on the type of orchid, moss, fir bark, dried fern roots, stones, coconut fiber, lava rock, or a blend of such materials is the perfect type of medium for orchids to grow in. The medium of choice for most orchid growers is fir bark nuggets.

Orchids do much better with less water than with excess water. Since too much moisture prevents air flow, the plant can quickly die. As a rule of thumb, orchids must be watered only once weekly. This way, the medium will have time to dry between waterings. When re-potted, the plant will cease active growth for several months; during this period, the plant must be watered even more sparingly.

Most of the orchids that grow in the tropics thrive in a humidity of 60 to 80 percent. Most homes in the winter have a humidity of 30 percent. This forces orchid growers to use humidifiers or humidity trays with an occasional misting of the plant.

The medium in which most orchids grow is poor in nutrients. To achieve a good growth rate, the orchid should be fertilized with a highly diluted liquid fertilizer. This should only be done when the plant is in the phase of active growth. Most orchid growers use a 30-10-10 fertilizer.

Another way to fertilize orchids is by misting them with a fish emulsion or seaweed extract. This will give the plant an extra boost of micronutrients.

Orchids do very well with small pots. Plastic pots are preferred because it is easier to remove the roots once the plant outgrows it. When potting the plant, the bottom of the pot can be filled with an inch or two of foam packing peanuts. This will guarantee maximum drainage. When moving the orchid, suspend it over the new pot while filling the extra space in the pot with the growing medium of choice. The crown of the orchid must be just a finger below the top part of the pot. If the plant is weak, it might be a good idea to secure it with some wire until its roots establish themselves in the new medium.

Some orchids need to be placed in new pots yearly, while others do well in the same pot for years. The general rule is that a plant shouldn't be re-potted unless it is absolutely necessary, since orchids do not like to be moved too often. The only time the plants need re-potting is when the growing medium has broken down so much that aeration is reduced, when the roots are growing outside of the pot, or if the plant is unbalanced by new growth.

Propagating orchid plants from seed is not an easy task. Unlike most other plants, the seeds of orchids do not have nutritional storage. In order to grow, wild orchids rely on fungi found in their natural environment to penetrate their root systems and convert nutrients into a usable form.

To properly propagate orchids from seeds, the conditions must be sterile. The seeds are initially grown in gelatinous substances that are rich in nutrients and growth hormones. Patience is the key. The first leaves may not develop for several months, and even then, they may be visible only with the help of a magnifying glass. The root system takes even longer to develop. It takes at least three or as many as eight years before the first flower appears.

It is much easier to propagate orchids through division. With this method of propagation, it will take at least a year before the first bloom appears. Larger orchid plants will produce more flowers, while small divisions may require many years before they mature enough to blossom. 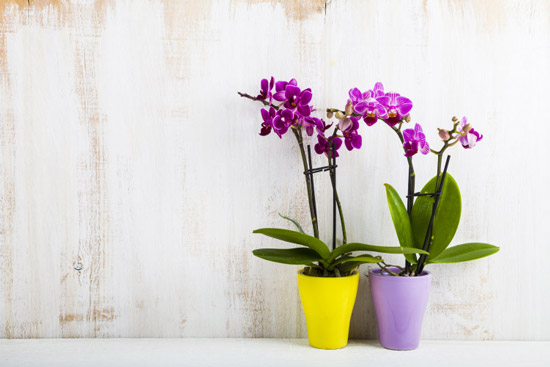 Looking for florists in the UK?

Serenata Flowers is an award winning online florist offering you the option to order flowers online from the comfort of your home or send them by post. We offer only the freshest and most gorgeous flowers to brighten up your home and put smiles on the faces of the people you know.

No matter where you are, if you need flowers delivered in the UK with next or same-day delivery, you can choose Serenata Flowers. Our flower delivery service is available Monday to Sunday.

Whilst we deliver 95% of our orders on time, due to the current UK driver shortage there might, on some occasions, be some delays with flower deliveries. Please allow 24 hours after the intended delivery date for delivery to be made. Due to the above, we are not able to refund orders on the grounds of late deliveries. If your order still has not been delivered during this time you are entitled to a full refund, or a resend, no questions asked.

If you paid for a timed delivery option and the order was not delivered on time, we will refund your order in full. Please allow 24 hours after the intended delivery date for delivery to be made, and should the gift not arrive during this time, we will also send a new one free of charge.

All delivery issues must be reported within 3 days of delivery date.
(Please note that banks might take 3-5 days to refund the amount on your card.)

Our delivery options tailored for your satisfaction

95% of orders arrive on a selected delivery date, but some won't make it on time. If we can't make the delivery on time, we will attempt another delivery on the following day.

Peace of mind service - guaranteed to arrive on your selected delivery date.

Peace of mind service - guaranteed to arrive on your selected delivery date before 1pm.