10 Most Expensive Wines in the World 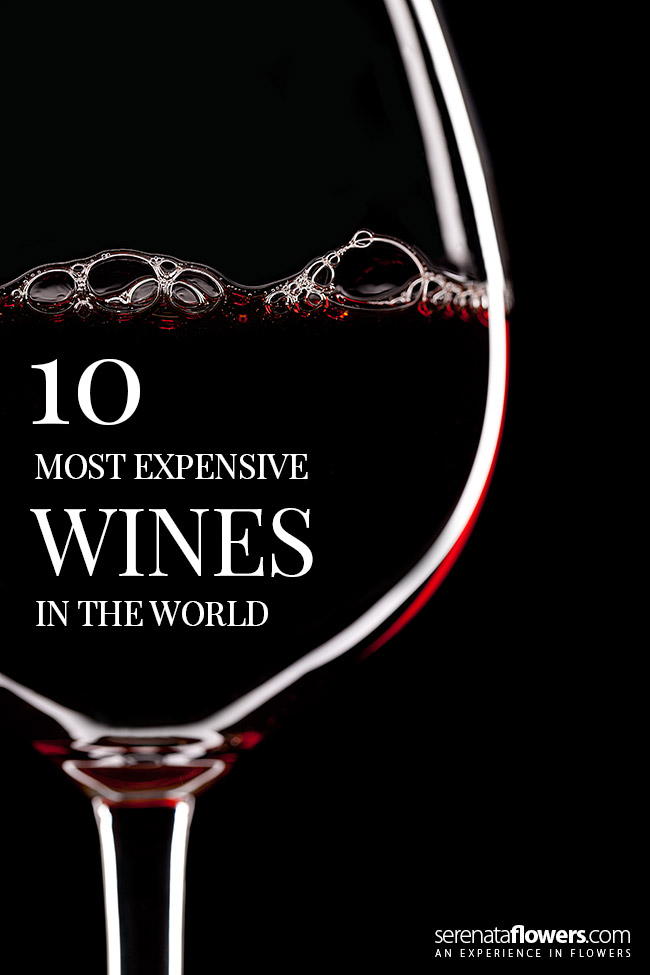 Are you thinking of picking up a bottle of wine for your dinner tonight? Who can blame you!

There’s nothing better than a nice glass of red with a thick steak or a glass of crisp white with a bit of monkfish but while most of the time we’ll settle for a medium-grade vintage sometimes it’s worth splashing out and enjoying something at the top end of the scale.

While the prices of the wines on this list are, well, astronomical, they are also said to be the very best wines in the world.

Experts believe this is the perfect Burgundy – and it should be for the price tag! However, it’s not easy producing this stellar of a wine. In order to be considered a Romanee-Conti Grand Cru it must be made from at least 85% of Pinot Noir grapes.

Interestingly, the Archbishop of Paris once described this wine as “velvet and satin in bottles”. Tempted?

Produced from grapes grown on a 2.5-acre site, this stunning Burgundy is said to be full-bodied and extremely rich.

According to winsearcher.com the very last vintage of this wine, which was in 2001, has been highly sought after by collectors in charge of thousands of bottles of wine.

The first German wine on the list, this Riesling is one of a kind, it is produced on the banks of the Moselle River in the German Rheingau vineyard.

It’s often been said that German wines are the world’s most underrated, which is probably no thanks to the production of Liebfraumilch and Blue Nun bottles during the sixties! The 2010 vintage was also rated 100 (out of 100) by a number of wine critics.

This dynamic white wine is produced in the famous Puligny-Montrachet estate.

The growing cycles of the grapes take into account the phases of the moon and the positions of the planet and it is made from the gorgeous Chardonnay white wine grape which gives it a beautiful smoky, toasty and buttery taste with a firm acidity for that added edge.

This sweet German white wine is produced at a vineyard which has been in the same family since the 17th Century.

This wine is said to stand for its own finesse and delicacy, rather than its power. This could be due to how deep in the ground the grapes grow in the grey slate soil.

The vineyard this wine is grown in is exceptionally unique due to the fact chemical fertilizers, insecticides and herbicides have not been used for more than a generation.

This wine is also unique in the fact it’s biodynamic and the grapes which go into it are unbelievably sorted individually on tables instead of on a conveyor belt.

Often described by critics as a “seductively fruity wine”, the Pinot Noir grapes used in this wine are again sorted carefully by hand to ensure only the very best go into the production.

The vineyard was founded in 1924 by a Mr. George Roumier who began bottling this gorgeous wine in 1945.

This bottle of wine has received more rewards than any white wine from France, with the Guide Hachette des Vins 2005, 2004 and 2003 vintages receiving three stars each.

The scent of the wine has also often been complemented and described as a “multi-dimensional aroma of honey and graphite, pear, pineapple, orange peel, and vanilla.”

Produced in a vineyard owned by a family who has been making wine since 1481, this bottle of plonk could actually lay claim to being France’s winemaking royal family!

Made from the dark-skinned red wine Syrah grape, also known as Shiraz, this wine is said to taste floral.

From a vineyard where no chemicals are used, but weeds are plowed rather than killed; the innovative winemaker behind this stunning bottle refused to filter his wines.

He is known for always destemming his grapes and that gives this premium bottle a distinctive flavor.

So, are you still feeling guilty about spending £20 on a bottle of wine???

Order from Serenata and enjoy fantastic tipples and wine hampers at the more reasonable end of the budget.

5 Pampering Ideas for the Weekend

The Best Secret Gardens in the UK

All You Need to Know about Gypsophila

All You Need to Know about Allium Flowers

All You Need to Know about Hyacinth