There’s nothing better than a refreshing cold beer after a week at work, and to make this drink taste even better, you may be surprised to know that there are actually a number of surprising health benefits to partaking in a beer or two.

However, it is important to note that these benefits can only be gained when the beer is drunk in moderation and not excessively. 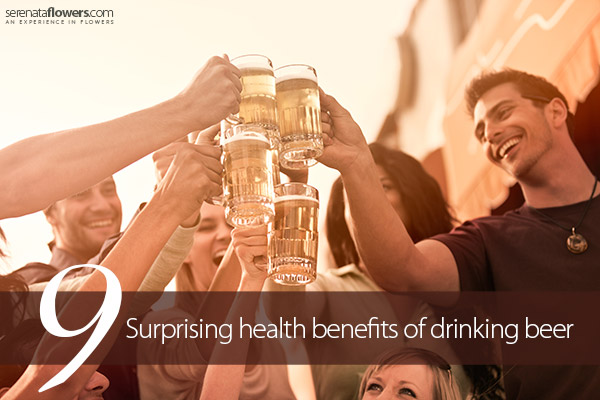 According to the Harvard School of Public Health, beer can actually decrease the risk of heart disease by between 20% and 40%! Meanwhile, researchers from the Harokopio University in Athena also found that a moderate amount of this beverage can also lower the risk of cardiovascular disease.

Beer comes with these health benefits largely because of the soluble fiber that’s present in the drink and as a result, lowers cholesterol.

Oh, and there are also polyphenols found in beer which are great antioxidants for your heart.

Beer is also known to decrease the chances of developing kidney stones, according to a study in Finland. In fact, we can expect a 40% reduction in the risk of these little terrors! It’s thought that the high water content found in beer is great for keeping the kidneys in working order; flushing all harmful toxins out.

Researchers from Rush University Medical Center found that beer actually reduces the risk of developing memory problems during old age by a staggering 23%. This is thought to be the case because beer can trigger the development of new brain cells, further benefiting the memory.

Beer is also known for increasing attention span and concentration which is beneficial to us all, especially for work!

A number of studies released by the American Stroke Association have revealed that by drinking a moderate amount of beer, drinkers can slash their chances of having a stroke by a whopping 50% compared to non-drinkers.

This is thought to be the case because moderate amounts of beer every day prevent blood clots from blocking blood flow to the heart and brain.

Beer contains a large amount of silicon which is a healthy compound that’s great for better bone health. In fact silicon increases bone density and as a result, keeps bone strong and healthy.

This was reinforced by a study in 2009 at Tufts University that found that older people who drink moderate amounts of beer had a higher bone density than those who didn’t. However, the research also found that those individuals who drink beer excessively actually had weaker bones and were at risk of bone fractures, so there’s a fine line to success!

Believe it or not, moderate consumption of beer can actually provide anti-cancer benefits! Beer contains something called xanthohumol which is a great antioxidant that’s known for its anti-cancer properties. This works to block the chemical reaction that ultimately leads to prostate cancer developing in men.

Oh and for the same reason, it’s also thought to reduce the chances of breast cancer in women.

This is probably one of the most shocking health benefits of beer; the fact it can protect us from Alzheimer’s. Originally revealed by the researchers from Loyola University in Chicago, after they analysed a number of studies and came to the conclusion that moderate beer drinkers were in fact 23% less likely to develop a number of forms of both dementia and Alzheimer’s.

It’s believed that this is down to the silicon content found in the beer, that’s known to protect the brain from high amounts of aluminium which are one of the causes of this disease.

After a study in 2011 of more than 38,000 middle aged men who drank two beers every day, it was found they had a 25% reduction in the chance of developing type-2 diabetes.

According to the research, this health benefit is down to the alcohol in beer increasing insulin sensitivity which works to prevent diabetes. Beer is also a great source if fibre which also plays a huge role in this illness.

If you suffer from the evil that is dandruff, you’ll be pleased to know beer is actually considered one of the best natural treatments. Thought to be due to the high amount of yeast and vitamin B in the beer, it’s recommended that you simply rinse your hair with the stuff two to three times a week.

Not only will this beer-shampoo leave you dandruff free but it will also leave your locks shiny and soft; what more could you ask for?

With so many health benefits arising from beer alone, it’s most definitely worth getting your hands on one of our beer hampers for your loved ones this Christmas!

Happy Birthday Messages for a Boyfriend