Loading...
Track Your Order
Help About Us Login / Register
x 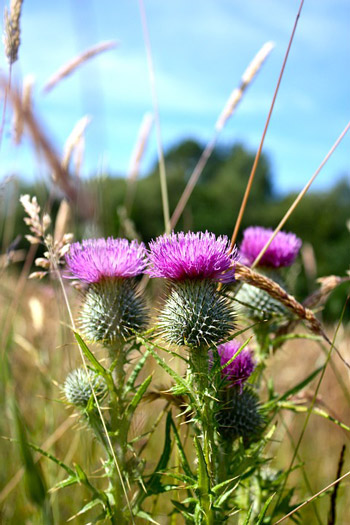 From their unique language, music, and culture to their vibrant countryside and awe-inspiring castles, Scotland is famous for its proud heritage and captivating landscape, making it a top choice for many travelers and those planning a destination wedding or highland adventure. Much like the tartan and well-known Scottish accent, one of Scotland's most identifiable symbols is its national flower, the Scottish thistle. An exceptionally beautiful flower, with a distinct appearance, the thistle can be found all over the country. From currency and clothing to jewelry and pottery, the thistle is an important flower deeply ingrained in Scottish culture.

While some historians disagree as to why or how the thistle became Scotland's national flower, a common and beloved legend is that this beautifully humble flower was once the savior of Scotland and became the official emblem sometime during the 15th century. During the reign of Alexander III, the King of the Scots from 1249 until 1286, a Norse army planned to attack the Scots under the cover of darkness. Upon landing at the Coast of Largs, the Norsemen removed their footwear to move stealthily across the land, in hopes of catching the Scottish Clansmen by surprise as they slept. Fortunately for the Clansmen, Scotland was home to a beautiful but dangerous flower, covered in vicious spines, that grew densely across the land. One of the Norse soldiers encountered the sharp spikes and immediately cried out in pain, alerting the sleeping Clansmen of the advancing Norsemen. The Norse army was quickly overcome and retreated home. While there is still some discussion as to which type of thistle protected the Scottish Clansmen that night, as there are several different species of thistle that grows in Scotland, it has been a significant symbol of Scotland for over 500 years.

Just as the thistle is the proud, floral emblem of Scotland, the Tudor rose is the symbol of England. In 1503, King James IV of Scotland married Princess Margaret Tudor of England, which inspired the famous poem 'The Thistle and The Rose' by Scottish poet William Dunbar. It was this Princess Margaret who went on to become known as Mary Queen of Scots (1542-1587), who had the thistle incorporated into the Great Seal of Scotland and deemed it the national symbol for longevity. This union of thistles and roses has been a beloved combination, incorporated into everything from emblems to stunning bouquets for banquets and weddings.

The thistle itself is biennial, meaning its lifecycle takes two years to complete, with the leaves, roots, and stems growing the first year and the flowers blooming the second. Although it dies after that second year, thistles are extremely hardy plants and seeds are easily spread, ensuring new plants sprout near the parent plant each year. The thistle has a delicate, vibrant flower which ranges from a vivid violent to a dark pink, with its unique shape making it stand out amongst the wildflowers that grow throughout the countryside of Scotland. Although elegant, this prestigious flower is accompanied by savagely sharp thorns along its leaves, that branch thickly from its stem. Its protective spikes and its tenacious ability to flourish in tough conditions, overcoming the most persistent of attempts to remove it from the land, make it a perfect symbol for the pride, determination, and perseverance of the Scottish people.

Growing from a base of spiny, yellow-tipped leaves, that can grow to over a meter in height, the thistle flower typically blooms from as early as late spring to around the middle of summer, with some species flowering as late as October. The flower itself is round and spherical, with slight variations in shape, depending on the exact species of thistle. This elegant flower is surrounded by a spiny bract, one of its most distinguishing features. The thistle's thick, sturdy stalk and standout flower make it a favorite amongst bouquets and wedding table centerpieces. Durability and vibrancy aside, the thistle has a unique texture of spikes and snowflake-shaped blooms that add depth and beauty to any hair adornment, floral arrangement, or boutonniere.

Representing bravery, devotion, strength, and durability, the humble thistle is the perfect symbol for Scottish determination.

For more information about the origins and meaning behind the beautiful Scottish thistle, follow the resources listed below:

Looking for florists in the UK?

Serenata Flowers is an award winning online florist offering you the option to order flowers online from the comfort of your home or send them by post. We offer only the freshest and most gorgeous flowers to brighten up your home and put smiles on the faces of the people you know.

No matter where you are, if you need flowers delivered in the UK with next or same-day delivery, you can choose Serenata Flowers. Our flower delivery service is available Monday to Sunday.

Whilst we deliver 95% of our orders on time, due to the current UK driver shortage there might, on some occasions, be some delays with flower deliveries. Please allow 24 hours after the intended delivery date for delivery to be made. Due to the above, we are not able to refund orders on the grounds of late deliveries. If your order still has not been delivered during this time you are entitled to a full refund, or a resend, no questions asked.

If you paid for a timed delivery option and the order was not delivered on time, we will refund your order in full. Please allow 24 hours after the intended delivery date for delivery to be made, and should the gift not arrive during this time, we will also send a new one free of charge.

All delivery issues must be reported within 3 days of delivery date.
(Please note that banks might take 3-5 days to refund the amount on your card.)

Our delivery options tailored for your satisfaction

95% of orders arrive on a selected delivery date, but some won't make it on time. If we can't make the delivery on time, we will attempt another delivery on the following day.

Peace of mind service - guaranteed to arrive on your selected delivery date.

Peace of mind service - guaranteed to arrive on your selected delivery date before 1pm.