All you Need to Know about Mother’s Day

They give birth to us, feed us, raise us and nurture us. Mums are pretty awesome when you think about it.

And that’s why they have their own special celebration – Mother’s Day.

A day dedicated to showing our dear mums just what they mean to us, it is a holiday celebrated throughout the world – but just where does it originate from?

And how do celebrations differ?

We’ve put together a definitive guide to help you find out. Isn’t that nice?

The origins of Mother’s Day

Contrary to popular belief, Mother’s Day was not just dreamt up by Hallmark as another way to make money. The tradition actually dates back to Ancient Greece (way before Hallmark) and was originally a celebration that honoured the Mother of the Gods: Rhea.

In their celebration, Ancient Greeks would drink the best wine and eat the best food in celebration of their beloved Rhea who gave birth to their whole creation.

The Romans had their own equivalent to Rhea known as Magna Mater – ‘Great Mother’. They also celebrated this figure (at the end of every March) in a festival called Hilaria. They even built a temple solely for their ‘Great Mother’ in Rome.

From these early traditions, the modern holiday of Mothering Sunday was born. This modern take on the celebration began as a way for servants to spend the day with their mothers and families during the 1600s … but it doesn’t end there.

A woman named Anna Jarvis was responsible for making the celebration a public holiday in the 1900s. Her mother, Ann Jarvis, had worked hard throughout her life to ensure mothers were appreciated for their hard work and loyalty but unfortunately died before her dream came true

Her daughter Anna picked up the mantle and after many years she held her first Mother’s Day gathering at a local Methodist church in West Virginia, USA. Determined to get her holiday onto the national calendar, she regularly campaigned to local and national newspapers and politicians. Her persistence paid off in 1914 when President Woodrow Wilson signed the day as a national holiday that would be celebrated on the second Sunday of May.

As the popularity of the American tradition grew, it began to be adopted in other countries – although the date of celebration differs. In the UK, we celebrate Mother’s Day on the fourth Sunday of Lent as this is traditionally when Christians would visit their mother at church. Historians believe that on their way to see their mother, children would stop at the roadside and pick flowers as a gift while traditional foods associated with Lent, such as Simnel cake, were eaten. 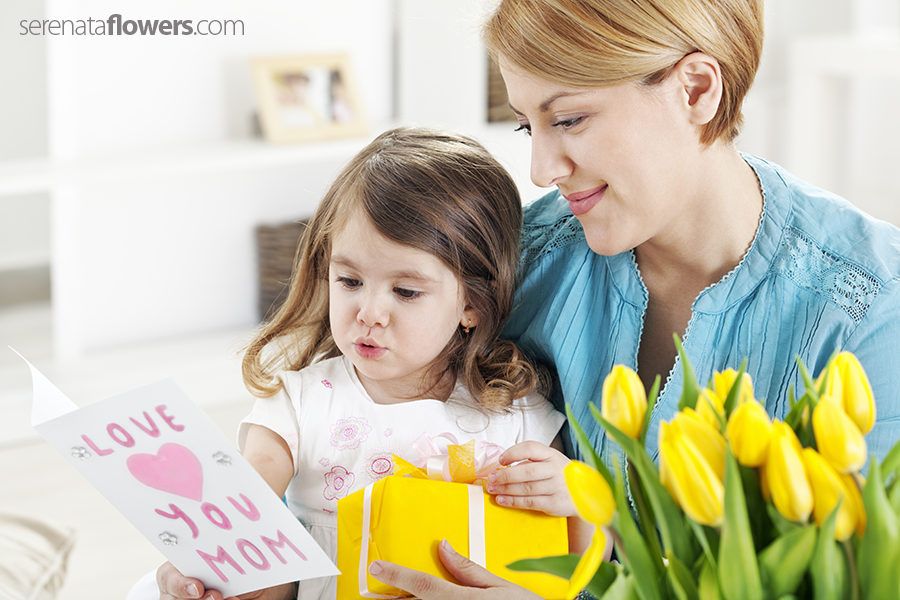 As you can see the traditions of Mother’s Day have changed a significant amount from the time of the Romans and Greeks but the overall meaning of the day has remained unchanged.

Today, as many as 71% of us describe our mum’s as our best friends – so it is no wonder that 30 million cards and gifts are purchased for the day! This might sound like a lot, but when you compare it to all of the effort and man hours our mums put into raising us, well, it pales in comparison.

According to research, the average mum spends over a period of 18 years:

This hardwork certainly deserves a reward and that’s why Mother’s Day is such an important celebration. It’s the one day of the year when you can truly show your mum just how much she means to you and say ‘thanks’ for all the little things she does that often go unnoticed.

Inherently selfless creatures, mums deserve to be celebrated on Mother’s Day and enjoy one day of the year when they don’t have to lift a finger.

Yet, while you might be preparing something special for your mum this Mother’s Day there are probable quite a few things you don’t know about the holiday. Let’s find out.

1. It used to be called Mothering Sunday

Ever heard Mother’s Day called Mothering Sunday? Well, that’s what it used to be called.

In the UK during the 1600s Mother’s Day fell on the fourth Sunday of Lent. Most children worked away from home from the tender age of 11 years back then but they would be allowed to return to their families on this day. They’d pick flowers for their mum on the way and present them to her on Mothering Sunday.

2. The USA do it a little differently

Believe it or not, Mother’s Day in America has a different history to that of ours. A young woman (who wasn’t a mother) named Anna Jarvis fought for the day to become a national holiday as a continuance of her mother’s work.

3. It actually comes from the Greeks

While the traditions and celebrations associate with Mother’s Day have their own unique histories, the actual custom of celebrating mothers and motherhood stems from Ancient Greece (doesn’t everything?) They help a festival to their Mother of Gods Rhea with the Romans adopting a similar ceremony for their equivalent deity: Magna Mater or “Great Mother”.

4. It’s not the same all over the world

Although a global celebration, Mother’s Day is not the same in every corner of the world. While the UK celebrates it in March, many other countries hold their celebrations in May while Yugoslavia mark the occasion in December! In total, 50 different countries celebrate the day.

In nearly all countries and all languages, the word ‘mother’ or ‘mum’ begins with the letter ‘m’.

6. Carnations are the most popular flower given

The most common flower given to our mums on Mother’s Day is the carnation – but why? According to religion, these flowers began to grow from the ground which was marked by the tears of Mary, Mother of Jesus, during his crucifixion and have been associated with motherhood ever since.

If you want to give your mum carnations this Mother’s Day then red and pink are the traditional colour choices which represent love and adoration. White carnations are used by those unlucky enough to no longer have their mums with them.

7. Bolivia celebrates the day based on a battle

The date for Mother’s Day celebrations in Bolivia is not based on Lent or taken from other cultures but actually coincides with the day that women first participated in battle in the country. The wider meaning of the day is therefore to celebrate women in general as well as mothers.

A man who is now known for a number of atrocities, it’s strange to think that Adolf Hitler loved Mother’s Day. When he was in power he placed great emphasis on celebrating the mothers of Germany but don’t let that put you off. The day is still an important occasion to celebrate.

During the 17th Century, the north of England and Scotland referred to Mothering Sunday as Carling Sunday or Carlin Sunday because pancakes made from steeped carlin peas fried in butter were traditionally served on day.

10. Mother’s Day is the busiest day for florists

Yes, Mother’s Day even beats Valentine’s Day for the number of bouquets bought as the number of orders placed rises by 40% around Mothering Sunday – well, mums do love a bunch of flowers!

Mother’s Day is also one the busiest times for eating out as a family, with restaurants in the UK often fully booked on this day.

With these 10 interesting facts in mind, you’ll never think of Mother’s Day in the way same again. It has derived from hundreds of years of tradition and now involves many bouquets of flowers and gifts.  Mother’s Day is a celebration of motherhood and the woman who gave you life and raised you. Make this year’s Mother’s Day extra special by sharing your new knowledge of the celebration with your mum and spoiling her rotten!

While the tradition of giving gifts on Mother’s Day is long-founded, there is plenty of flexibility over what you decide to buy.

According to Media Reach, we Brits spend an average of £27.37 on our Mother’s Day presents. We don’t only buy presents though, a total of 30 million Mother’s Day cards also get sent on Mothering Sunday whilst 46% of us message our mums on Facebook.

We aren’t the most generous gift-givers in the world though and whilst we spend almost £30 on our mums the Brazilians spend £112 on theirs! Time to up our game!

According to The Guardian newspaper the following gift ideas are most popular in the UK on Mother’s Day:

While flowers are unsurprisingly the top choice of gift it might shock you to learn that this year there is expected to be a 60% rise in the number of bouquets sent to mums. Daffodils are the usual choice of flower but that doesn’t mean you can’t look for something different to stand out. Why not pick your mum’s favorite blooms or look at long-lasting plants instead of a bouquet?

Alternatively, why not try something new altogether. Plenty of writers and poets have immortalised the holiday in their work over the years and including some popular quotes in your cards or gifts (as a framed passage perhaps) is a great idea.

Some of our favorite quotes from history and modern times include:

“Mama was my greatest teacher, a teacher of compassion, love and fearlessness. If love is sweet as a flower, then my mother is that sweet flower of love” – Stevie Wonder

“Motherhood: All love begins and ends there” – Robert Browning

“All that I am, or hope to be, I owe to my angel mother” – Abraham Lincoln

Mother’s Day around the world

Mother’s Day doesn’t just have a long and varied history – it also has a universal reach that sees it celebrated in all four corners of the globe. How it is celebrated does differ from country to country. Let’s find out how.

What Mother’s Day means to us

Interestingly, this might not have been the case if Julia Ward Howe had got her way.  Back in the 1800s, Howe tried to change the celebration to be a day of peace. An American writer, feminist and pacifist, Julia was so passionate about her dislike of Europe joining the Franco-Prussian War so soon after her own people had endured the American Civil War that she worked tireless to make the holiday ‘Mother’s Day for Peace’ and have it celebrated on 02 June each year.

The author of Battle Hymn of the Republic, she was the woman who first opened the world’s eyes to this idea in 1872 but unfortunately found very little interest for her ideas. Only mother’s who had lost sons in combat showed support for her ideas with most males disinterested.

Nonetheless, her passion was not wasted and while ‘Mother’s Day for Peace’ never caught on, she is credited with heading the American branch of the Women’s International Peace Association which observed a day of peace as a celebration – just not one connected to Mother’s Day. So, next time you are about to take your mum for granted, remember all the good things she has done in her life and how you can thank her for them on Mother’s Day. Whether you celebrate it in March, May or any other time of the year, this is an important holiday with plenty of significance and a long history which owes a lot to the Greeks, Romans and Miss Anna Jarvis.